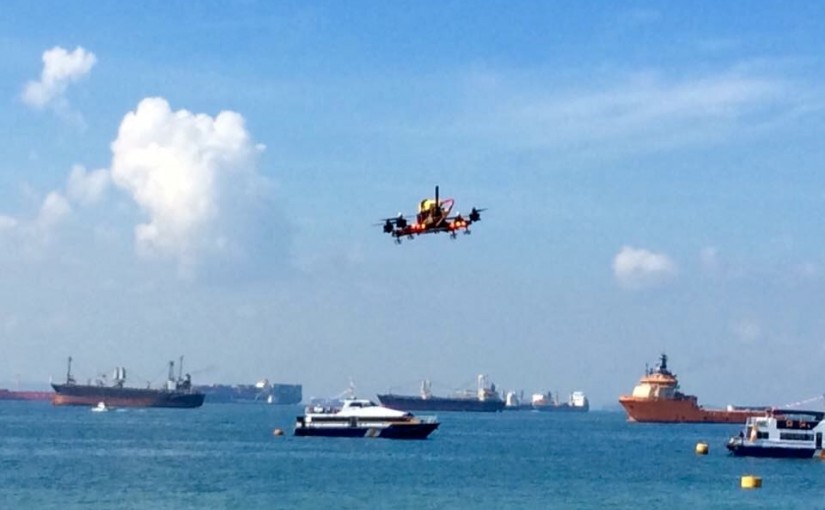 Racing drones are becoming more and more popular, and it would not only be interesting to know, how fast they can really go, but also which parameters have a major impact on their maximum speed. When I searched in the net, I couldn’t find clear answers and had to work out something by myself; so here is my model. To be clear, my intention is not to get absolute precise numbers, but more to understand the physics behind, and to have a tool to get realistic estimates and comparisons of flight parameters for different quadcopter models. If you are not interested in the details, just scroll down to the end of the page, where I show the final formulas and some calculated examples. 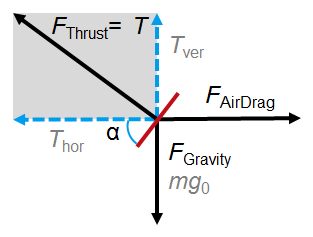 The model is based on classical mechanics, basically Newton’s second law of motion:

Thrust is defined as a force and measured in Newton. In datasheets motor thrust is usually shown as pull P in gram for selected propeller types, therefore it has to be multiplied by gravity:  T = P * g0.

For the two special cases of a vertical climbing quadcopter, or – at a given altitude – forward flying quadcopter, based on (1) the following equations have to be solved:

In both cases, due to the air drag, the quadcopter will reach a limit speed without further acceleration. We calculate this limit speed as maximum possible rate of climb (3a) or forward flight speed (3b):

The factor with the square root in (3b) reflects the fact that a certain fraction of the thrust is needed to keep the quadcopter at constant altitude. The vertical component of the motor thrust has to compensate the gravitational force mg0. The copter flies with a forward pitch angel α.

From (3a) we get the maximum rate of climb:

Introducing the thrust over weight ratio TR = T / (m·g0) we get the rate of climb as function of thrust ratio TR:

The thrust ratio has to be greater than 1. Beside the thrust ratio, the maximum climbing rate is a function of the weight (m) and the size (area A) of the quadcopter, as well as the aerodynamic drag coefficient cD.

From (3b) we calculate the maximum forward flight speed as

The effective area Aeff is a function of the forward pitch angle α. To simplify the calculation we only take into account the vertical projection of the quadcopter top area

and as result we get

For practical thrust ratios around 2 or higher the factor under the double square root is close to 1. As for the maximum rate of climb, the maximum forward flight speed depends on the weight, size and aerodynamic form of the quadcopter, but the main factor is the thrust over weight ratio. An increase will directly translate into an increase in forward speed.

We now can use equations (5a) and (8a) for the estimation of the maximum rate of climb and the maximum forward speed of a quadcopter:

For the DJI Phantom 2 Vision+ MTM is 0.35 m, weight is 1.24 kg and propeller size 9 inch. With a thrust ratio of 1.9 we calculate a maximum flight speed of 17 m/s (61 km/h) and a maximum climbing rate of 9 m/s. The specification of the Phantom shows 15 m/s maximum speed and 6 m/s rate of climb. Practical tests show an actual climbing rate of 8 m/s.

Though the model is rough with simplifications, it seems to give some realistic numbers. The result is not surprising: for a given model the major factors to increase speed are reducing weight (lighter battery), increasing thrust (change of propellers) or improving aerodynamics (reducing the drag coefficient).

The parameters with the highest uncertainty in the calculation are the actual effective area and the drag coefficient (Aeff cD). It would be interesting to get some actual measured values.